Since Samsung launched its first smartwatch in 2013, the company has gone ahead to launch several others that have caught the fancy of smartwatch users worldwide. And because the company keeps upping its game with each new release, it is now one of the biggest players in the smartwatch market.

While most Samsung smartwatches are pretty much unisex with customizable features that make them perfect for women, a few sport designs and features that most women would fall in love with. And we’d be reviewing some of those in this post. 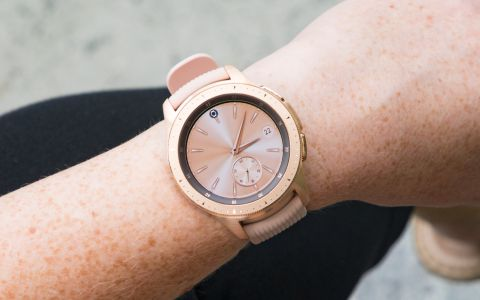 We are not aware of any Samsung smartwatch made exclusively for women. But a good number of options are available that apparently look like standout options for tech-savvy, fitness-conscious, or fashion-loving women.

After spending hours comparing several Samsung smartwatches, our research team was able to figure out a few options that women won’t go wrong with. These options were carefully handpicked based on design, features, performance, battery life, customization options, and buyer reviews. Read on to learn more about our top picks. 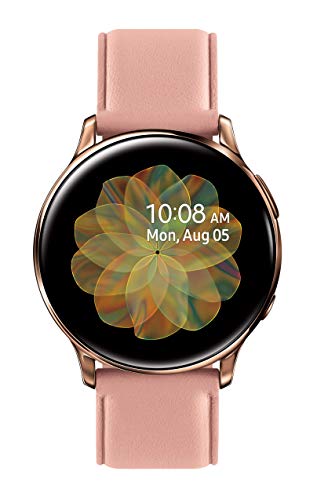 The Samsung Galaxy Watch Active 2 is an upgrade to the original Watch Active, offering more comfort, apps, and sensors including ECG and LTE. It is one of the best Android-compatible watches available with solid fitness features and brilliant performance.

The Watch Active 2 looks a lot like its predecessor but this model now comes in 40mm and 44mm sizes. Both are pretty light as the former weighs 26g while the later weighs 30g. Another difference between both sizes is that the cheaper one comes with a rubberized Fluoroelastomer band (similar to the Apple Watch) while the costlier variant uses a leather strap.

As stated earlier, the Watch Active 2 comes in two size variants and the one you go for determines your screen size. The 44mm size comes with a larger 1.4 screen while the 40mm comes with a 1.2 screen but screens have the same 360 x 360 resolution and the same AMOLED panel that’s sharp and brilliant.

This model also brings back the bezel that was in the original Watch but was missing in the Watch Active. This time it is thinner, touch-sensitive, and acts like a rotary controller similar, making a “satisfying” click sound when turned.

The Watch Active 2 is exceptionally fast and lag-free, thanks to its Exynos 9110 dual-core chipset which is supported by 768MB of RAM on the cheaper model and 1.5GB of RAM on the LTE variant. Nonetheless, both models come with 4GB of onboard storage.

As expected, this wearable runs on Samsung’s proprietary software, Tizen 4.0 which hasn’t really changed much since the release of the original Watch Active.

Utilizing a suite of sensors, this Watch can track up to 39 workouts including swimming and jumping. However, most of the tracking results are inaccurate and this includes the heart rate monitor and even the GPS.

If Samsung’s claims are anything to go by, this Watch can deliver up to two days of active use but turning off some features like Always-on and LTE can help extend the battery life. To be precise, the 44mm variant comes with 340mAh while the 40mm comes with 247mAh. It’s also important to add that there’s no fast charge technology. 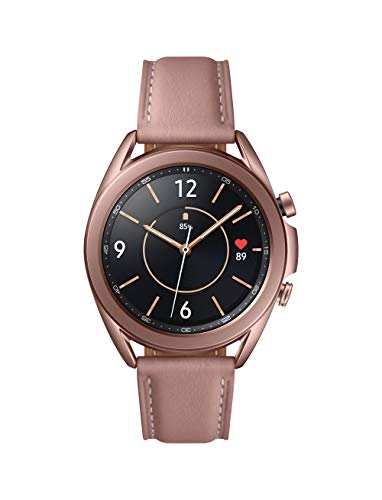 The Samsung Galaxy Watch 3 is another proof that the Korean company has also mastered the art of making smartwatches like Apple. This model brings back the rotating bezels while sporting a great design and other significant health-focused upgrades.

Aside from the health features, the design department is one aspect that Samsung gets right about Watch 3, with its round face, physical rotating bezel, and an elegant appearance.

Much like it’s predecessors, the Watch 3 adopts a traditional look but it is about 15 percent lighter, 8 percent smaller and 14 percent thinner than the Galaxy Watch. It comes in two size variants of 45mm and 41mm, suitable for those with average-sized and smaller wrists – both of which are available in Mystic Silver or Mystic Bronze colors.

As for the straps, this model sports a leather strap that seems to be durable but you can swap it out for a silicone strap if you so wish. The Galaxy Watch 3 also features an IP68 rating and can withstand sweat and water alongside many trips to the gym.

There are two buttons on the side of the Watch with the first acting as the stop/start and select key while the other functions as the back/home input key.

Samsung did increase the size of the display from the usual 1.2 inches to 1.4 inches, which makes the Watch look bigger on the wrist. You will be interacting with a circular 360 x 360 resolution OLED touchscreen inside the metallic rotating bezel.

The screen is nice to look at as it has a bright, colorful display with a sharp resolution that’s easy to see both indoors and outdoors. Unlike the Apple Watch that offers only 5 watch faces, the Watch 3 offers as many as 80 000 different watch faces.

Samsung’s proprietary software, Tizen might not the best out there but it is fast and easy to use. Under the hood, this smartwatch boasts the Exynos 9110 chipset that’s supported by 1GB of RAM and 8GB of onboard storage.

In terms of health and fitness tracking capabilities, the Watch 3 can track a total of 40 activities, out of which seven can be tracked automatically. App support is significantly better as there are apps for everything from getting directions and the local weather to the versions of Tetris and Snake.

The Watch also supports all the popular music services you’d expect including Spotify while Samsung Pay makes it quick and easy to make NFC payments using the Watch if you sign up.

The drawback to the Samsung Galaxy Watch 3 is its battery life. It comes with a 340mAh cell which can last up to two days but you can extend the battery life by disabling the always-on feature of the screen. The charging process is slow, taking up almost two hours to go from zero to max. 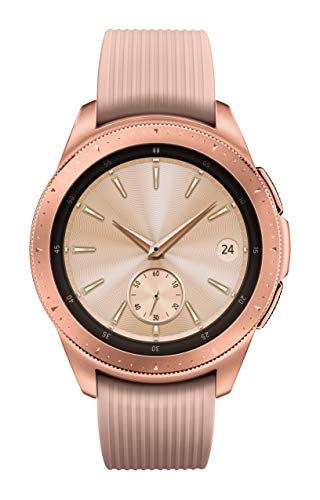 Dubbed the Gear S4 in disguise, the Samsung Galaxy Watch shares a striking resemblance with its cousin, the Gear S3. Thankfully, the watch doesn’t just excel in design but also boasts an outstanding battery life and tons of fitness-tracking capabilities that make it one of the best on the market.

You will be forgiven for mistaking the Samsung Galaxy Watch as a regular watch because of its stylish design. The first thing you’d notice about this smartwatch is that it sports a large circular face and a metal body as is the custom with conventional watches. The design takes on a minimalist approach devoid of visual distractions.

With a case that weighs 40mm, this smartwatch can comfortably sit on your wrist, making it easy to sleep with. It comes in two size variants of 46mm and 42mm with the options of midnight black, and rose gold strap colors. If you find the strap unappealing, you can always change it when you want to.

On the right side of the watch, you will find two buttons to make navigation easier. The top button will take you back to the previous option, but it will take you straight to Samsung Pay if you press and hold it.

The second button is a home button, but it also provides access to Bixby, Samsung’s virtual assistant if you double-tap it. Thankfully, the buttons are clicky and responsive, indicating that this is a well-engineered smartwatch.

Both variants of the Galaxy Watch feature the same 1.2-inch 360 x 360 AMOLED display so you will get fractionally lower pixel density in the larger model. The screen is bright and color-rich so you can see everything, even during an outdoor run. It is protected by Gorilla Glass DX.

Furthermore, this wearable is dust and water-resistant up to 165 feet, and you can even force liquid out of the watch by blasting its speaker. Also, the screen has a rotating bezel with numbers on the edges to let you accurately read the time but the downside is that the screen details are slow to update when woken up each time.

On the rear, there’s an optical heart rate monitor that can take readings throughout the day. Under the hood, the operations of the smartwatch is managed by the Exynos 9110 dual-core processor which clocks at 1.15GHz when paired with 768MB of RAM and 4GB of internal storage.

The Galaxy Watch is a brilliant performer as it is able to track 39 exercises in total including indoor exercises and strength-training exercises, a feat we seldom see on more expensive watches.

You can easily switch between the various tracking functions and modes by rotating the Galaxy Watch’s bezel. It also features GPS and GLONASS support which works alongside the optical heart rate monitor, accelerometer, and barometer.

In terms of OS, the Samsung Galaxy Watch retains Tizen in its 4.0 incarnation. It works quite well as it is fast, intuitive, and simple but its biggest issue remains the poor third-party support.

According to Samsung, you can get about four days of use out of the 427mAh battery. The only way to top-up the battery is via wireless charging and it’s not fast. 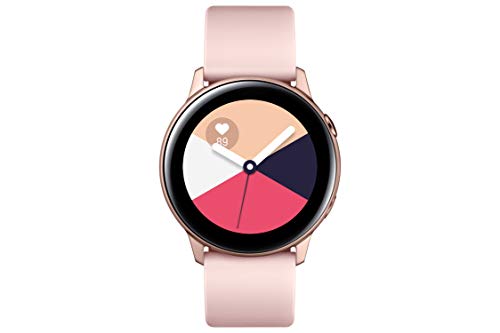 Launched as the follow up to the Galaxy Watch, the Samsung Galaxy Watch Active adopts all of what makes most smartwatches standard and crams them into a smaller package. It showcases an array of fitness features at an affordable price point.

A unique selling point of the Samsung Galaxy Watch Active is that it is smaller than its predecessors. Its new design isn’t just compact but also sleeker, sportier, and more sophisticated. Unfortunately, it is at the expense of the famous rotating bezels.

On the back of the watch sits the heart rate monitor to track your pulse all day long. The overall dimensions of this wearable are 39.5 x 39.5 x 10.5mm with different color options including rose gold, silver, black, and blue.

The Samsung Galaxy Watch Active sports a 1.1-inch AMOLED screen that’s easy to read even I direct sunlight. The screen size indicates that it is made for women unlike men with bigger thumbs who might have trouble interacting via the screen. It has Gorilla Glass 3 like its predecessor but it lacks the Corning’s DX+ composite coating. Also, the watch has dust and water resistance to depths of 5 meters.

The Galaxy Watch Active features the same dual-core 1.15Ghz Exynos chipset, 750MB of RAM, and 4GB of internal storage as the immediate past model. The UI also looks better due to the newer version of Samsung’s homegrown Tizen, which supports a range of sensors such as heart rate monitor, blood pressure monitor, barometer, accelerometer, and so on. You will also get auto-tracking modes for 39 activities during the day and a sleep tracker for when you fall asleep.

Third-party apps are limited on the Galaxy Watch Active but there are a few popular apps on board such as the Spotify app which lets you download music for offline listening, a feature not available on many Apple Watch versions. Unfortunately, the performance of Bixby is terrible as it doesn’t recognize basic commands except you say specific phrases. Google Assistant does a better job.

The battery performance hardly wows anyone as it comes with 230mAh which lasts for just about three days on moderate usage. There’s a small wireless charging pad in the box but it doesn’t charge fast. If you’re running low on battery juice and you’re not near a charger, you can simply turn on the power saving mode to reduce the watch’s functions to basic.